Why monarchs need our help 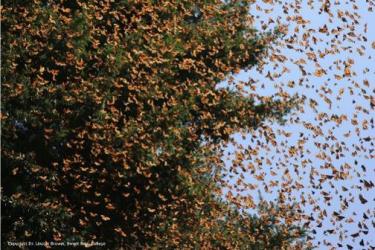 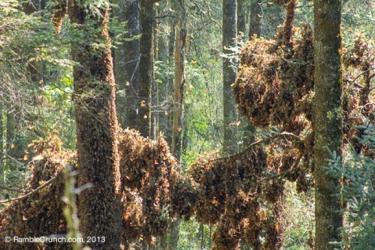 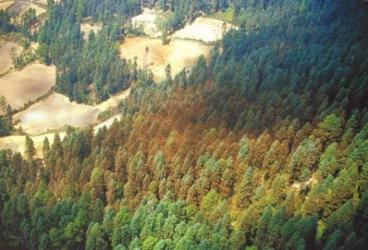 The location of the overwintering sites for monarch butterflies wasn’t known to the scientific world until 1976. Beginning in 1994 local scientists have conducted a systematic survey of the size of the overwintering colonies every year to get an idea of population size. There is no other insect species for which you can get an estimate of the population size so conveniently. It is not possible to count the millions of butterflies individually so they measure the area of trees covered by monarchs in hectares (1 ha = 2.5 acres). It has been estimated that 1 hectare encompasses about 20 million butterflies.  Since 1994 the population has declined by about 70%, with the majority of the decline occurring between 1994 to 2007. Monarch populations naturally go up and down every year in response to weather conditions for the 3-4 generations during the breeding season. There was an average of 7.6 hectares from 1994-2007 but 2.9 hectares since. The 2013 population was down to 0.67 ha, which is just somewhat bigger than a football field. This still represents millions of butterflies but the concern is with bad weather events at the overwintering sites. The 2001, 2003, and 2015 populations experienced extreme winter weather events that killed up to 70% of the individuals. Luckily, this didn’t occur during a low year, but if it had occurred for the 2013 population one wonders if the population could have come back. We have estimated that for the population to experience its normal ups and downs and still be able to persist despite winter weather events there needs to be an average of 6 hectares.

So, what happened to cause this decline? Some work we began in 2000 indicated that milkweeds, the monarch’s host plant, were prevalent in corn and soybean fields in the Midwest, and were heavily used by monarchs. The Midwest has been shown, using stable isotopes, to be the main source of the overwintering population. We estimated at that time that perhaps as much as 80% of monarch production in the Midwest came out of agricultural fields. But then we found that in subsequent years the abundance of milkweeds in fields declined to the point where they were basically nonexistent. This milkweed decline coincided with the adoption of Roundup Ready corn and soybeans. These crops were genetically engineered so they could be sprayed with Roundup herbicide and survive while the weeds in the field, including milkweeds, would die. So, once these crop field milkweeds were gone it was more difficult for monarch females to find patches of milkweeds to lay eggs. Monarch females have a very particular egg-laying behavior. When they find a patch of milkweeds they will lay 1-2 eggs and then move on to the next patch. There is tremendous predation on monarch eggs and larvae and this may be a way of “not putting all your eggs in one basket”. But the consequence is that females must constantly be searching for the next patch. When literally millions of patches have been eliminated on the landscape, finding patches is harder, and females will lay fewer eggs in their lifetime, reducing the size of the population. 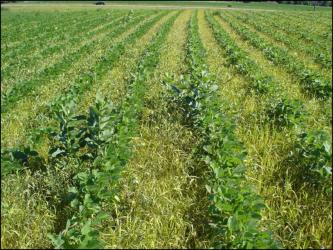 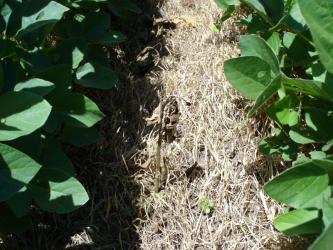 I have estimated that to bring the population up to an average of 6 ha, we would need to add 1.6 billion milkweed stems back to the landscape. This is obviously a large number and based on what I described previously about female egg-laying behavior, these milkweeds must be added throughout the landscape. Where is there sufficient land to do this? There are 2.5 million hectares of land available in the Conservation Reserve Program (CRP).  This is land that the federal government pays farmers to set aside and not plant crops, often because of erosion issues. This land has typically been planted to grasses but adding flowering plants, including milkweeds, could enhance the value of this land both for monarchs and pollinators. In addition, there are 5 million hectares of marginal cropland which could be turned into pollinator and monarch habitat with the right financial incentives. Milkweeds are commonly found in roadsides. There are 3.2 million hectares of roadside and milkweeds that could be added, along with other flowering plants. Personal or urban pollinator gardens could also be helpful as we need as many patches as possible. 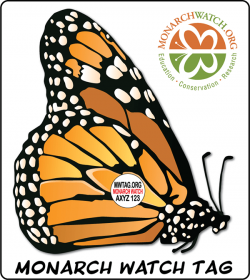 We know a lot about the process of fall migration because of an extensive citizen science program, sponsored by Monarch Watch, where people throughout the migratory region capture migrating butterflies and place a tag on their wings. Some of these tagged butterflies are recovered in Mexico and the information on the tag can be used to tell where they came from. From these data, we have found that for migration to be successful it has to be within an optimal time window. Butterflies have a solar clock that tells them when to start migrating. But they also need to know how far they have to travel each day to arrive in Mexico around the first of November. They use the position of the sun to keep them on pace for the 2000-3000-mile trek to Mexico. The position of the sun at solar noon, SASN, gives them information about the progress they are making. The SASN declines during the fall. If, along their journey, the SASN is between 57 and 46 degrees then they are on pace. Late stragglers don’t make it. Tagging information also has shown that those that have to travel farther are less likely to make it to Mexico. Butterflies from the Northeast have a more difficult route along the Appalachian Mountains (the Eastern flyway) than butterflies from the Midwest (Central flyway). Many people bring caterpillars in from the field and rear them to prevent them from being eaten by predators. Although this increases their chances of survival, we have found, from tagged reared butterflies, that their probability of making it to Mexico is 50% that of wild butterflies. Many mysteries about the biology of this fascinating species remain to be solved.