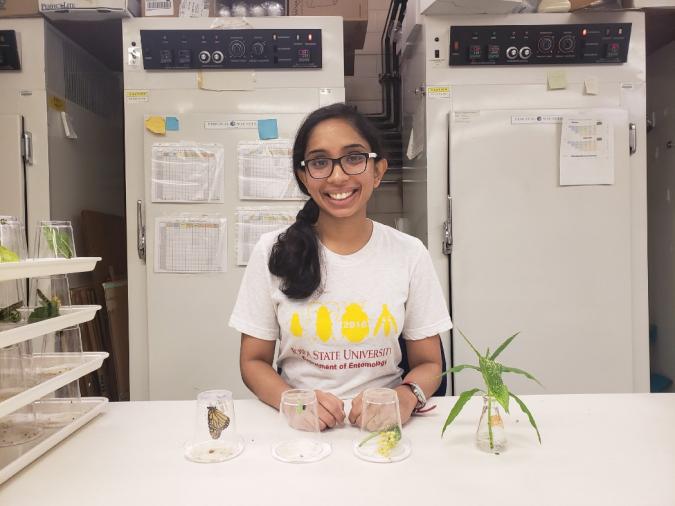 Niranjana Krishnan is a Ph.D. candidate in Toxicology at Iowa State with a B.S. in microbiology and M.S. in biomedical genetics. Her current research examines pesticide risks for monarch butterflies and she recently attended ComSciCon 2019 in San Diego to connect with fellow science communicators. To learn more about Krishnan's #scicomm interests, visit her blog, EnTox Simplified.

by Sarah Feehan and Dana Schweitzer

Niranjana Krishnan, a Ph.D. candidate in toxicology at Iowa State University, attended ComSciCon 2019 from July 11-13. This annual conference was hosted in San Diego, California, where Krishnan was one of 50 attendees selected from 700 applicants.

“I applied last year, but I did not get through,” Krishnan says. “It’s a very competitive workshop. They only select 50 students from the U.S. and Canada.”

ComSciCon is a series of workshops focused on the communication of complex and technical concepts. Every year, participants build communication skills that scientists and other technical professionals need to express ideas to their peers, experts in other fields and the general public.

At the core of the conference is this belief: Science is for everyone.

Krishnan explains, “It’s about communicating science in a way that people not only understand it, but also that it’s open and accessible to all.” Attendees were introduced to professional communicators who have a deep understanding of how to best communicate science to the public in this open and attainable way.

During this year’s conference, each attendee was asked to describe what his or her research was all about. During each presentation, audience members gave feedback -- “awesome” or “jargon” -- using flip cards.

“This was a great way to push attendees to explain their research in simple terms, and in a way that made sense to those without years of education on a single-subject matter,” says Krishnan.

“It was nice to see that there were so many communicators. I loved learning about the unique ways they had come up with to communicate science,” Krishnan says. Key topics that resonated with her were the discussions about diversity, inclusion, mental health and empathy.

Representation was also a important topic. For example, if a child is asked to draw what a scientist looks like, he or she is likely draw a white man.

“Science is a lot more. It has people of different races, ethnicities, sexual orientations and people with disabilities,” Krishnan says. “The way the presenters answered questions really opened up the audience. They were being very frank and open. I think the attendees felt they could have candid conversations,” Krishnan says.

Krishnan has been thinking about different ways to approach incorporating what she learned at ComSciCon into her work with monarch butterflies and insecticides.

She says, “Instead of just stating the facts, I need to really look at where both sides are coming from. While I’m looking into how insecticides affect monarch butterflies, I need to simultaneously investigate how farmers can continue to be successful in growing crops. How do we look at the big picture and have all necessary parties a part of the conversation?”

Krishnan is pictured below with all the ComSciCon 2019 attendees in San Diego. She also featured @RealScientists.