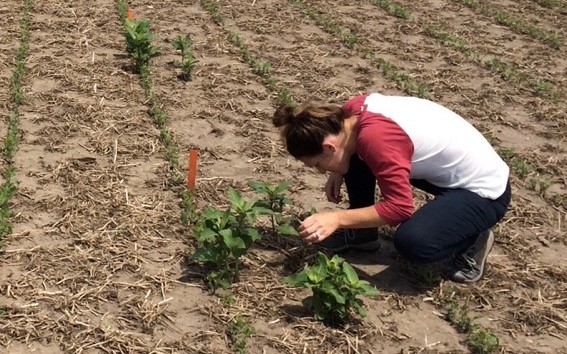 Wondering how herbicide affects milkweed? Does it die, do females still lay eggs on it, and do caterpillars thrive? Recent Iowa State graduate Sydney Lizotte-Hall and ISU Extension Agronomist Bob Hartzler conducted trials with herbicide fomesafen to find out.

Common milkweed was planted where it would be exposed to fosmesafen spray near a soybean field once a year for both 2016 and 2017. Another control group of common milkweed was located outside of the spray area.

After application of fosmesafen, leaf damage was observed, and some leaves fell off. However, fresh leaf growth continued, and new leaves appeared normal.

Milkweed plants were checked weekly for monarch eggs and caterpillars from May until August. In this study, fomesafen did not affect egg laying behavior in either year, and caterpillars of all five instars were present and did not appear to be affected.

The full text article is now available online and will be published in a forthcoming issue of Crop Protection. Lizotte-Hall is currently employed at Corteva Agriscience.