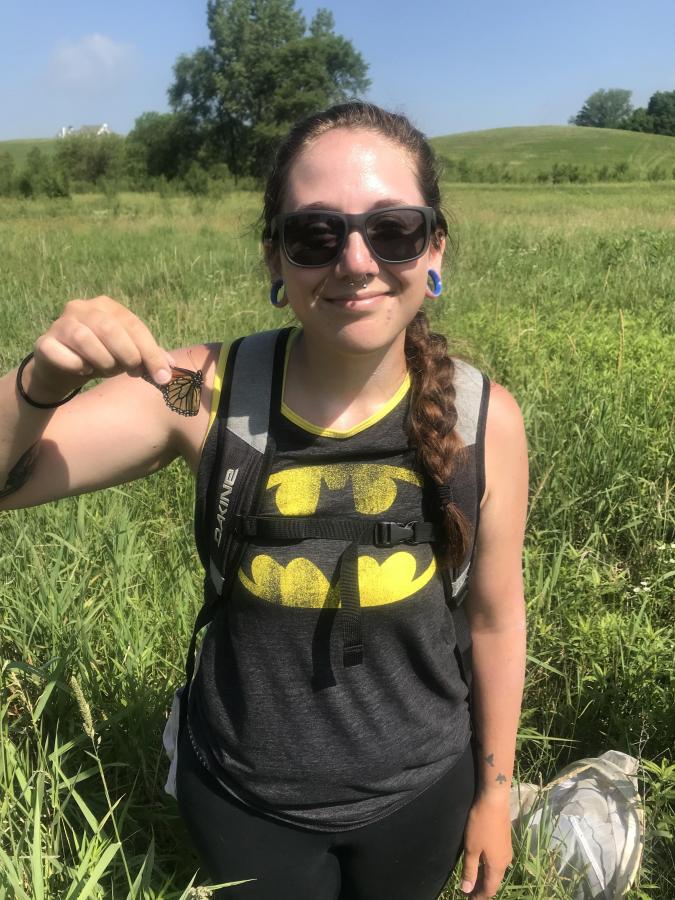 Jenna Nixt is a undergraduate research assistant with the Iowa State University monarch butterfly research team. Originally from Ankeny, Iowa, her interests include ecology, natural resources, and insects. She has worked with the monarch team in the field and in the lab since 2018.

What did you enjoy the most about growing up in Iowa? I loved being in a state that allowed me so many different environments to explore. I was always outdoors as a child and I was climbing trees, running through corn fields, jumping in lakes, or trekking through tall grass. I had so many opportunities to learn about the environment even as a kid and I am really thankful for that.

Why did you choose Iowa State for college? Both my mom and my dad, as well as my sister, attended Iowa State and it influenced my decision a lot! ISU was also close to the town I grew up in, so I am close to family, and it had the program that I was interested in. Not a lot of other colleges have an Animal Ecology program so I was very excited when I found it!

What’s the most useful thing you’ve learned as a student? I have learned not to procrastinate. That’s always been a big issue for me but after my first semester in college I learned quickly that I had to do better. I have applied that to all aspects of my life and feel more accomplished every day.

Why did you choose Animal Ecology for your major? I’ve loved animals since I was a little girl. My grandpa raised rabbits when I was growing up and I always wanted to be in the bunny barn playing with them. I’ve had a vested interest in the environment as well because my parents are local farmers. I feel as though I grew up being very aware of nature in general and that’s why I ended up on this path.

Why are you interested in the monarch butterfly? Since monarchs are so well known and so easily recognizable, I always thought I knew a lot about them. At the beginning of this job, I realized I had no idea how their life cycle worked or when and where they migrate. Just learning those few simple things has influenced how I perceive insects in a way that was truly unexpected to me. I have always been interested in prairies and native plants because of the incredible diversity you can see in even a small section.

What’s the most useful thing you’ve learned as an intern? The thing that I value most about my time with the monarch team is the change in how I view insects. I used to be creeped out by a majority of the insect world but now I don’t mind them as much. I’m really excited to be able to go out into a forest or a prairie and not be terrified of all the bugs! My experience with the team has been extremely rewarding and I have learned more the past two summers than I have since graduating high school.

How do you hope to apply what you have learned in the future? Because of the time I have spent with the team, I am actually considering adding a minor in Entomology to my course work. I want to be able to understand the relationship between not only animals and their environment, but with insects as well. And I've met so many amazing people!

How can Iowa citizens help the monarch butterfly? Planting and maintaining milkweed and flowers that are useful to pollinators is one of the biggest things people can do to help monarchs! Making sure that monarchs have all the resources they need to lay eggs and feed throughout the breeding season is crucial to their continued survival.