How to determine the best location for a habitat

The fascinating relationship between the monarch butterfly and its obligate host plant species, milkweed (Asclepias) has long drawn attention from scientists and the public alike. As the obligate host plant of monarch caterpillars, milkweed is the only plant they eat. Therefore, its presence in the environment where monarchs reproduce in the summertime is crucial for their survival. Unfortunately, milkweed habitat has declined across much of the Midwestern U.S, an agricultural region that makes up a large part of the monarch’s breeding range. This loss of milkweed habitat is expected to make it more difficult for female monarchs to find milkweed to lay their eggs on and reduces the food supply for growing caterpillars.

The decline in the Eastern North American monarch butterfly population and the recognition that milkweed may be a limiting factor for monarchs within their breeding range has sparked major conservation efforts to reestablish milkweed into this agricultural landscape. However, the midwestern U.S. is responsible for >50% of corn and soybean production nationwide (Farm Progress, 2021). Introducing safe and effective monarch habitats in this landscape requires incorporating small, dispersed habitats and depends on farmers and monarch conservationists working together. To be most effective, habitat should be placed in key areas where monarchs can find and use it.

So how can we determine the best locations for habitat? Well, we conduct experiments of course!

To improve our understanding of where to establish habitat, we must first understand how monarchs move when searching for food and egg-laying sites. These sites should include milkweed as well as flowering plants that provide food in the form of nectar to adult butterflies. A monarch’s behavior, specifically the patterns and decisions made while searching for these plant resources (resource-seeking behaviors) and the distance that they can detect important plant resources (perceptual range), may help us determine the best spatial distribution of habitat placement within and across this agricultural landscape. Such knowledge has the potential to improve the accessibility and use of habitat restoration as well as facilitate movement from one patch to another.

Monarchs like many other lepidopterans (moths and butterflies) use a combination of visual and olfactory (smell) cues when searching for habitat. Olfactory cues are likely the first to be detected while searching. Interestingly, like many other insects, monarch’s “smell” with their highly sensitive antennae and rely on wind to carry these cues. Once they get within visual range of the habitat, they may rely more on visual cues such as plant shape or color to distinguish one plant from another. Vision and olfaction are thus the two primary senses that shape a monarch butterfly’s ability to detect and locate host and nectar plants. But the question remains; how far away can they pick up these cues?

To investigate this question, we used controlled flight experiments to investigate how monarchs that were deprived of food and access to milkweed orient their flight direction relative to habitat patches made up of nectar flowers (food) and common milkweed (host plant) when placed at distances of 3, 10, and 25 meters upwind. What are “controlled flight experiments” you ask? Well, to keep monarchs from flying away, we attached monarchs to a flight mill (Figure 1). To attach butterflies to the flight mill arm we 3D-printed tiny tethers (weighing less than half a gram) and glued them to the monarch’s back. This was used as an attachment point, like the way a leash is attached to a dog collar. This design allowed butterflies to move and fly but limited movement to a circle around the flight mill or around the tether-point itself (Figure 2). 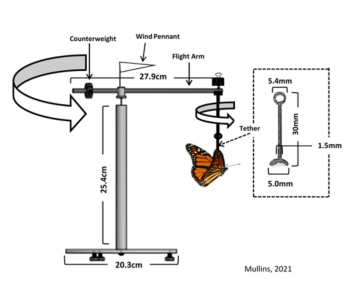 Figure 1. The flight mill consists of a central base and column atop which is low friction, rotating arm. A wind pennant was placed on the top of the flight mill to keep track of the wind direction. Monarchs were attached to the flight mill arm by attaching a tether to their back and clipping the loop into a small jewelry clasp. This design allowed butterflies to fly in and horizontal direction as well as having the ability to change directions. 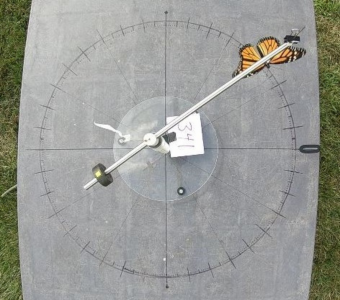 Figure 2. Aerial view (from above) of a monarch butterfly on a flight mill. Each butterfly was given a unique identification number and tested for a total of 5 minutes. We recorded the direction that the butterfly’s head was pointing every 5 seconds to understand preferred flight direction and their overall flight behavior and patterns when a habitat patch was absent or present at distances of 3m, 10m, and 25m.

Monarchs were attached to this flight mill one at a time and we recorded their behavior with a camera. The video data was then analyzed to determine butterfly orientation (direction butterfly was flying) and wind direction every five seconds.

So what have we found so far?

While this study is still ongoing, we found that most monarchs preferred to fly upwind (into the wind) when a resource patch was absent (our control) and at each distance tested. This makes sense because the wind carries the olfactory cues (smells) used to locate habitat. However, the strength of this response suggests considering the local and landscape-level wind patterns when positioning habitat patches is likely to make it easier for monarchs to find and move between habitat patches at various spatial scales. While we did not find any difference in the variability of orientation direction across distance and control groups, we are now investigating turn angles. In a number of other studies, turn angle was used to understand flight behaviors including perceptual range. which have been found to vary depending on resource density (the number of flowers or host plants within a patch) as well as whether the butterfly is inside or outside of a habitat patch. Ecological modelers can use this information in models that predict monarch movement patterns to make better predictions about the best places to put monarch habitats in agricultural landscapes.