HabiTally enables farmers, ranchers, landowners, and private citizens to support monarch recovery by entering data about monarch habitat conservation efforts on their farms or yards or even in locations where groups may create new habitats like churches or parks.

Monarch butterflies face many challenges contributing to a significant decline in their population over the last two decades. However, more breeding habitat and food resources, including milkweed and nectar sources, will help monarch populations recover across the migration route.

To participate, users drop pins on a map to mark their conservation habitat location and enter basic, key characteristics of the habitat, including the estimated number of milkweeds, the percent of nectar flowers, and, if known, the date the habitat was planted. HabiTally will then automatically calculate the size of the habitat based on the user’s entry and auto-populate information about the milkweed density and land use classification. Users can also record whether they have seen monarchs in their habitat. The data can help provide information on gains in milkweed across the U.S. Data collected by HabiTally will be housed at Iowa State and shared with the Fish and Wildlife Service to help guide future conservation and protection decisions. 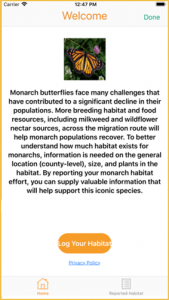 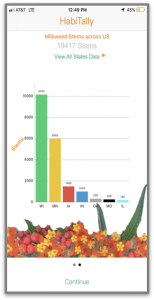 Last December, the United States Fish and Wildlife Service announced that adding the monarch butterfly to the list of threatened and endangered species is warranted but precluded by work on higher-priority listing actions. With this decision, the monarch becomes a candidate for listing under the Endangered Species Act (ESA), and its status will be reviewed each year until it is no longer a candidate.

The app was developed in 2019 as a collaboration between Bayer and The Climate Corporation, with support from Iowa State University’s Center for Survey Statistics and Methodology. The app is available as a free download on iOS and Android devices from the App Store by searching HabiTally monarchs.