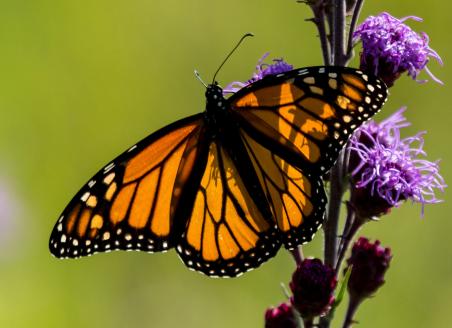 AMES, Iowa - A report released yesterday by the World Wildlife Fund (WWF) indicates that the eastern monarch butterfly population has slightly increased. The report, produced annually by the WWF in collaboration with the National Commission of Natural Protected Areas (CONANP), the National Autonomous University of Mexico (UNAM), and the Monarch Butterfly Biosphere Reserve (MBBR), states that the monarch population is currently estimated to occupy an area of approximately seven acres of forest canopy in Mexico, a 35% increase from last year. However, scientists estimate a long-term average of 15 acres of the occupied forest canopy is needed to sustain the eastern North American monarch population and its continental migration.

The announcement comes at a pivotal time for monarch conservation. The species is currently under consideration for listing as a threatened or endangered species by the U.S. Fish and Wildlife Service. The FWS concluded that adding the monarch butterfly to the list of threatened and endangered species is warranted but is currently precluded by work on higher-priority listing actions. With this decision, the monarch becomes a candidate for listing in 2024. At this time, the FWS recommends continued implementation of voluntary conservation efforts within the upper Midwest.

“It is essential to provide habitats for monarch butterflies to help minimize their population decline,” said Kayla Lyon, director of the Iowa Department of Natural Resources. “The Iowa Department of Natural Resources is proud of its partnerships with private landowners, conservation organizations, and state and local governments that contribute to monarch habitat management’s preservation efforts on larger scales.”

Monarch butterflies are familiar to most Americans, but they face many challenges, including losing milkweed and nectar plant habitat in their spring and summer breeding ranges. Female monarchs lay eggs exclusively on milkweed plants, and caterpillars also feed solely on milkweed leaves, though adult monarchs feed on nectar from a variety of flowering plants. Habitat restoration and reconstruction should include a diverse array of milkweed and blooming species to provide nectar for adult monarchs throughout their entire life cycle, including spring and fall migrations.

“The Iowa Department of Agriculture and Land Stewardship is proud to work with public and private partners to expand wildlife habitat on our agricultural, urban, and public lands,” said Iowa Secretary of Agriculture Mike Naig. “I encourage everyone to look for opportunities to join this effort as we all have a valuable role to play in enhancing our state’s water quality, soil health, and native habitat through conservation practices.”

The current Iowa Monarch Conservation Strategy  — developed by consortium members — guides the implementation and documentation of voluntary, statewide conservation efforts based on the best available science. Their approach fosters habitat improvements in rural landscapes that do not conflict with agricultural production, are sufficient in scale to support improved monarch breeding success, and strive to complement other conservation programs.

“Ongoing research and extension efforts at Iowa State are essential in helping determine the status of monarch butterflies and conservation practices needed to sustain their population,” said Daniel J. Robison, holder of the Endowed Dean’s Chair in the College of Agriculture and Life Sciences. “We continue to partner with individuals and organizations at the state and national levels to inform science-based decisions towards the sustainability of this species in Iowa and throughout our region.”

Iowa Monarch Conservation Consortium is a group of 50 organizations, including agricultural and conservation associations, agribusiness and utility companies, universities, and federal agencies.