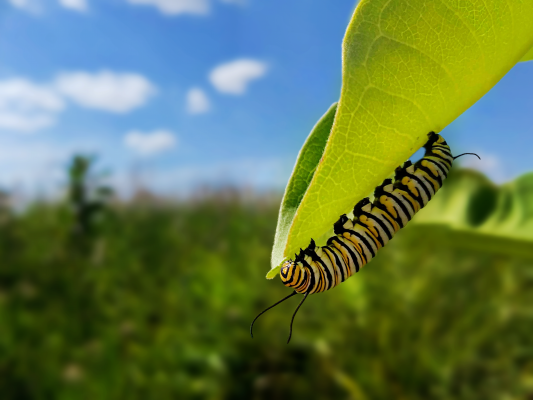 The question posed in the title of this blog formed the basis of my Ph.D. work at Iowa State University. Why is it important to know if exposure to insecticides can impact the conservation of the iconic monarch butterfly? Because to preserve North America’s eastern monarch butterfly population, it is essential to plant milkweed in the U.S. Midwest which serves as the monarch’s summer breeding ground. Establishing milkweed in numbers large enough to counter monarch decline would necessitate the use of midwestern agricultural landscapes1, where insecticides are commonly used to manage various insect pests. Accordingly, there is concern that exposure to insecticides might result in high mortality or other negative effects in monarchs, thereby countering any gains in population that would be expected from milkweed establishment. However, data to support or reject this concern were lacking.

To evaluate if utilization of milkweed and nectar plants near insecticide-treated fields would harm or benefit monarchs, I teamed up with Dr. Steven Bradbury, my Ph.D. advisor, and Dr. Tyler Grant, a postdoc with extensive experience in modeling monarch population. We started off by first evaluating the likelihood of insecticide exposure on monarch butterflies. Finding that monarchs are likely to be exposed to commonly used insecticides in the Midwest, we conducted toxicity tests where monarch eggs, caterpillars, chrysalis, and adults were treated with six insecticides. We found that monarch caterpillars and eggs are more sensitive and that certain classes of insecticides (diamides and pyrethroids) are more toxic than others (neonicotinoids and organophosphates). Interestingly, monarch caterpillars provided relatively low doses of neonicotinoids failed to form a proper chrysalis; further research indicated that the insecticide might be interfering with the function of neurons necessary for successful chrysalis molt2.

Following generation of toxicity data, we estimated concentrations of insecticides that monarchs could be exposed to, to assess risk. We predicted that drift from foliar insecticides would cause high mortality in monarchs and that runoff from seed treatment insecticides would cause little to no mortality3,4. The data were then incorporated into a monarch landscape model that took into account wind direction at the time of foliar insecticide application, levels of pest pressure, location of fields with respect to milkweed, the behavior of monarch, etc. We primarily compared two scenarios: milkweed establishment close to agricultural fields vs. milkweed establishment further away. The resulting analyses showed that more monarchs would be produced when milkweed was established everywhere (vs. further away from agricultural field) despite greater exposure to insecticides5. I also got the opportunity to test a newer class of insecticide called double-stranded RNA (dsRNA) insecticide that operates by silencing critical proteins. Monarch larvae were unaffected when provided dsRNA that targeted their V-ATPase protein, which is necessary for pH equilibrium6. This is encouraging as future insecticide products could increasingly employ dsRNA technology.

Ultimately, the data generated over the last five years provided useful information on monarch’s susceptibility and risk to different classes of insecticides, identified a novel mode of action for an existing insecticide class with implications in conservation, and helped answer the question of whether and where to establish monarch habitat in agricultural landscapes.